Last weekend was the Bay Area Book Fest (BABF) here in my adopted hometown, and amidst a sea of birthday parties and other end-of-year commitments, I managed to hit two sessions: Rebecca Solnit speaking with John Freeman on Sunday morning, and a panel called “Writers on Motherhood” on Saturday morning. Both the sessions I attended left me brimming with ideas and feeling like a part of a world that’s exciting, intellectually stimulating, and full—even though, you know, I have a kid.

Yes! At the “Writers on Motherhood” panel, there was a lot of honest talk about how the writers presenting (Rivka Galchen, Sarah Manguso, and Rachel Richardson) had, before they had children, thought of motherhood as something for other people. When they reluctantly decided to become mothers (only after each had at least one book out) they approached it with a certain degree of dread and the assumption that their lives would end. (Galchen admitted that she thought/hoped her daughter would be like a plant that you tend gently for a few years and that eventually grows into something that you can relate to.) The realities of motherhood—the sleeplessness, the sensation of springing milk at every moment, the unwelcome advice and comments from strangers, and the way, as Sarah Manguso said, one’s entire relationship to time and space shifts, was unexpected, and at first unwelcome. But ultimately, each of the writers realized that motherhood is, in fact, interesting. It’s not all diapers and laundry and feeding schedules; there’s something inherently stimulating and intellectually engaging about being so in the service of another human being.

And each of them began to write about it.

Perhaps it was this affirmation—that motherhood is in fact interesting and worthy of being written about—that most appealed to me about this panel. It’s no news that the word “domestic” has been thrown around as an insult for years, that writing about motherhood and marriage has been seen as less important than writing about, say, seafaring, conquering, and hunting. This is garden-variety sexism, sure, but it’s also somehow about privacy, and how what happens in the home has been seen as less significant than what happens in the outside world. But in recent years a lot of serious, talented writers have been writing about the private spaces of motherhood, reclaiming it as a subject worthy of literature. If you haven’t yet read Emma Donoghue’s Room, or Curtis Sittenfeld’s Sisterland, or Jhumpa Lahiri’s The Lowland, or Ayelet Waldman’s Bad Mother, or Monica Wesolowska’s Holding Silvan, or any of the books by the three women who presented at BABF—then get thee to your local library post-haste.

And at the same time, more and more women have been speaking out about how questions about parenting and the domestic are frequently and unfairly lobbied at mothers who write but not at fathers who write. Just check out the recent New Yorker interview with novelist Lauren Groff, who says:

I’d made the decision before the boys were born that I was going to feel no guilt or shame about my parenting. I’m a good mother and want to spend as much time as possible with my kids, but I travel a lot, I shut myself away from my family to work every day, I do not do birthday parties, and I went to one play-date in my life and wanted to break the Perrier bottle on the floor and stab myself with it. We have intense conversations in my house about apportioning responsibility, because neither my husband nor I wants to assume roles based on messed-up collective assumptions about gender dynamics. I think that, in our society, the idea of motherhood is pathologically ill, and even well-meaning people assume martyrdom in a mother. Guilt and shame are the tools used to keep people in line; the questions I get most at readings or in interviews are about being a mother and writer…I think people are mostly kind and don’t know that, when they ask these questions of women, they are asking us to perform a kind of ceremonial subjection—that we’re not allowed our achievements without first denigrating ourselves or saying, with a sigh, “Yes, that’s correct, I’m a writer and a mother, and it’s so hard, and, no, I don’t do it well.” The truth is, doing these things is hard because being a good parent is always hard, but the difficulty of parenting is separate from the difficulty of work.

I think this is just brilliant, and more than that, it’s radical. When Groff says she doesn’t do birthday parties, and when Kim Brooks talks about cutting out the “white noise” of parenting, each is making a powerful statement about not succumbing to prescribed gender roles that assume that the mother in the family—assuming there is one, or only one—will handle all the extraneous bits and pieces of parenting, including those birthday parties and soccer practices and playdates and endless school commitments. Saying no is requesting, and requiring, a shift in all of our thinking.

And so, it seems to me, one of the most radical things a writer-mother can do in the 21st century? Write about being a mother, and be unflinching about it.

This is great news for me, because I’ve realized that motherhood is a subject I really can’t get away from. Mothering Leo creeps into everything I write: into the novel I’m writing about a woman who has no intention of being a mother becoming one anyway; into blog posts like this one; even into my Tweets (recent example): 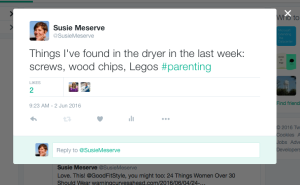 And when a guy I hired to help me with some aspects of my writing life read all of my stuff, his first comment was that I write about motherhood.

“I do?” I asked. “But I have that one essay about dating the guy with schizophrenia. And a memoir about anxiety.”

“Sure,” he said, “there are outliers, but a mother has all kinds of other experiences besides parenting, right?”

It’s funny, when I came home from the “Writers on Motherhood” panel and tried to explain to B what was so wonderful about it, I faltered. It was something about what I’ve been writing about here, about being reminded that it’s okay to write about being a parent; good, even. But it was also about seeing three really smart women talking about the seriousness of their writing. It felt a little like being in graduate school again, when I carried around with me, for three years, this belief that writing was the most important thing on the planet. It was wonderful to feel that again for a minute, to get the references to books I’ve read, the references to craft, to forget for a minute that I had to go home and make lunch for a six-year-old. It seems a little ironic to have enjoyed the panel for that stark reminder, but there it was: our lives have changed since writing was the most important thing. Now, as mothers, our children have eked into first place.

So how do we reconcile that? In part, by writing about it.

Stay tuned for my brand-new website and blog More Than a Mother, coming soon!