This happened on the same day that our car, which we had just purchased a new battery for, wouldn’t start in the driveway, and though arguably less crucial to life, and much cheaper to replace, the broken printer filled me with a more terrible sense of loss. I’ve had that printer for sixteen years. Sixteen years! That’s longer than I’ve known my husband. I bought it when I was in grad school, when I was tired of sending out poems printed all wobbly on my mom’s hand-me-down ink jet. The HP 1200 LaserJet cost $350, and at the time, that seemed like an enormous amount of money. I remember feeling like an adult, and like a real writer, when I bought it. It lasted through countless Apple computers—Four? Five?—and has printed countless poems; it’s printed my poetry manuscript and parts of my memoir and various essays in their draft stages, and many student assignments, and it was only when I went to print the first forty pages of the novel I’m writing that I mistakenly fed it a recycled piece of paper that was actually two pieces of paper, with a staple between them, and something snapped.

It seems outrageous that after all these years, it was a staple that did it.

But that, I suppose, is life, and if I make too much of the demise of a printer, let me just say that I’ve had this feeling lately that life is all these concentric circles, these interwoven links, and that everything is connected. So, for me, the loss of the machine that’s helped me put my writing into print for over a decade feels a bit like the loss of an entire era, like the loss of those lovely grad school years when the printer was new, those years when I could spend an entire day working out a poem, bring it to workshop, take it back home and work on it some more. That first year of grad school I lived in a makeshift apartment in a rickety old house in Amherst, and it was my first year living alone in quite some time (I’d had a live-in partner, and college housemates, before that). I can remember the night I thought drinking a second bottle of wine by myself was a good idea, and the night I broke up with someone but slept with him anyway, and the night I overheard every word of an argument between my landlords over the recycling bins and whose turn it was to take them out.

And then I moved, to an apartment in Northampton that was as charming as it was noisy, and the printer came with me. My desk was an old door from a house my parents were renovating propped up on two filing cabinets, and the cords for my computer fit through the hole where the door knob would go. The printer was on the far right, and despite this unwieldy late-nineties desktop computer and the large LaserJet, there was enough space for me to sit, comfortably, between them. The desk was in my bedroom, but I’d made a psychic barrier between the bed space and the writing space, and every morning I wasn’t teaching I’d stumble over to the desk with a cup of coffee and get to work. Some days the poems came like water, trickling easily out of the faucet, and other days they were labored and slow. Always, I’d print them, read them out loud, change a comma, read them out loud again. I drank so much coffee in those days; my anxiety, and my adrenal glands, shudder with the memory.

But was it a simpler time? Of course it was. When writers ask whether an MFA is worth it, I cite those hours at that desk and the feeling of summer camp, like I was writing in Northampton while Leah was writing in Sunderland, with Leslie at her desk in the adjacent room, and the Bens back in Amherst and someone else out in Greenfield, all of us working away like satellites in communication with one another, pausing for whatever; or not working, and pulling our hair out, and blocked—but that was our job, that, just to try to work, not to parent or to homestead or to be married or to publish—we didn’t even worry that much about publishing! Perhaps we should have. But just to do the work. I’ll never get that time back; I’ll always want that time back.

I left Northampton on January 1, 2001. On New Year’s Eve at 9:45 p.m. I’d been painting my blue walls back to white and packing the last of the boxes. Later, I walked over to see some friends. I’d already kissed Laura goodbye, and Leah was long gone, and Mikey vowed to stay in touch (and did). Jim Foley was very much alive. And off I went the next morning, drove out to Portland, Oregon, with my little brother, hitting every winter storm whatever region we were passing through could throw at us. And when he flew back to Boston a day or so later, leaving me to my new life, I cried like I’ve never cried before or since, with loneliness, with anguish, with the deepest sense of loss.

But, and perhaps this was no accident: a week later, I met the man who would become my husband. And then so many things happened that truly feel like fate: us deciding to travel together for a year, and us getting engaged while we were traveling. And me writing a book about that year of travel, and about my surprise, after always having felt outside of it, to have found a man who truly loved me. That book spanned the next decade of my life. And then we moved to Norway and had a baby, and when we got back, we tried again, and again, and again to have another, and I wrote about that, too.

And here I am, terribly pensive of a January morning. L didn’t want to go to school, and his face turned puffy with tears. B tried to rationalize with him about school and its importance, but I eventually just held him and said, “You’re having a really tough morning.” My morning was tough, too: the printer, the car, the muddled-ness, the awful news of the world.

“You’re squeezing me too tight,” he said, but I wasn’t sure what else to do but hold on.

First there was this. 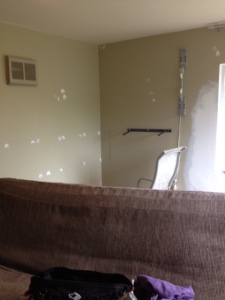 Just this junky old room with moldy brown carpet and three flavors of paint (one puke green, one puke pink, one puke indeterminate). This was the studio adjacent to our apartment, which had sat empty for years and years on end, except as a dumping ground for various items of hardware that had been used in the renovation of our place. When we moved in next door, the landlord told us he was planning to renovate the studio for Maya, the eccentric and kind older woman who gardens here every Tuesday. Of course neither B nor I particularly wanted anyone to move in next door, but what could we do? Maya is very nice. Our landlord said he would begin fixing it up in January. Then it was February. Then March. As May arrived, we realized he had no intention of ever getting to it—or at least, not any time soon.

And then one day Maya announced to B that she had found a different place to live, and it occurred to me that without the incentive of fixing it up for Maya, George really might not get to it for a while. In other words, right next to my house was a small sunny room with its own bathroom that was….

And perfect to become a writing studio.

I emailed George and asked whether he would consider letting me rent it. I can’t pay you much, I said, but it’s more than you’re getting now, and I’ll do all the work. And after an agonizing two weeks, he wrote to say he thought that would be fine. (!!!) Then he agreed to let me paint, pull out the carpet, and generally make it mine. And so, a few weekends ago, I got up early and went to work. I sanded the walls and painted them a soft, soft gray. We hauled the nasty carpet out to the driveway. I scrubbed the floors, cleaned the bathroom, put up a shelf, washed the cover on the dusty old futon that lives here. I moved in a lamp, a chair, some throw pillows, a rug, and finally, a desk. 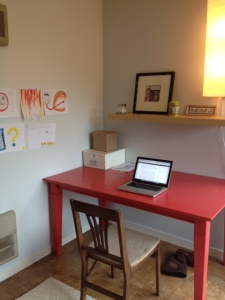 I have wanted my own writing space for—well, forever. In grad school, in Northampton, Massachusetts, I had a pretty great two-room apartment with large windows and high ceilings and lots of space, and I had an office there, though it was one half of the room I used as my bedroom, so not totally ideal. Since then, though, we’ve never had the extra space, and I’ve worked in coffee shops and at the library or, occasionally, at the kitchen table. The trouble with any of these places, of course, is that they’re noisy and you can’t pace around reading things out loud or debating the finer points of a sentence or shouting “why is this so f%^&*#g hard?!” You can’t hang up on the wall all the bits and baubles of paper and notes and whatnots that have come to you in brilliant moments or procrastinating moments. You can’t casually leave your laptop and go make a cup of tea, because someone might steal your last five years of work.

And at the kitchen table, it’s far too easy to feel guilty about the dirty dishes or the bills that just came shooting through the mail slot and get distracted.

In short, none of those places are yours and yours alone, your place to write, to think, to procrastinate, to mess up, to be.

But this place is. Mine.

You’ll see, on the wall to the left of the desk, a series of pieces of paper. To christen my new writing studio, I hosted the Creative Women’s Cocktail Hour here last week, and we did an exercise: we used a couple of one-word prompts and responded to them using paper and pens and crayons and markers, scissors and collage and glue. 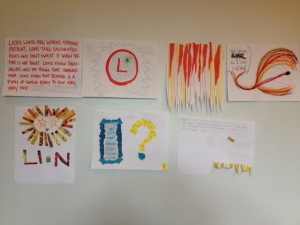 The first prompt, given to me by a certain five-year-old, was “lion.” I loved the way these all looked next to each other when we hung them up, like they all spoke to each other somehow. I could feel the space warming up with color and words and intention.

We went on to do more; we riffed on “illness,” on “middle.” We worked independently but all together, and eventually, we filled the whole space with paper.

It reminds me of a poem from a mentor I miss, the terrific late poet Agha Shahid Ali:

The moon did not become the sun.
It just fell on the desert
in great sheets, reams
of silver handmade by you.

The night is your cottage industry now,
the day is your brisk emporium.

The world is full of paper.
Write to me.

Yes, the world is full of paper.